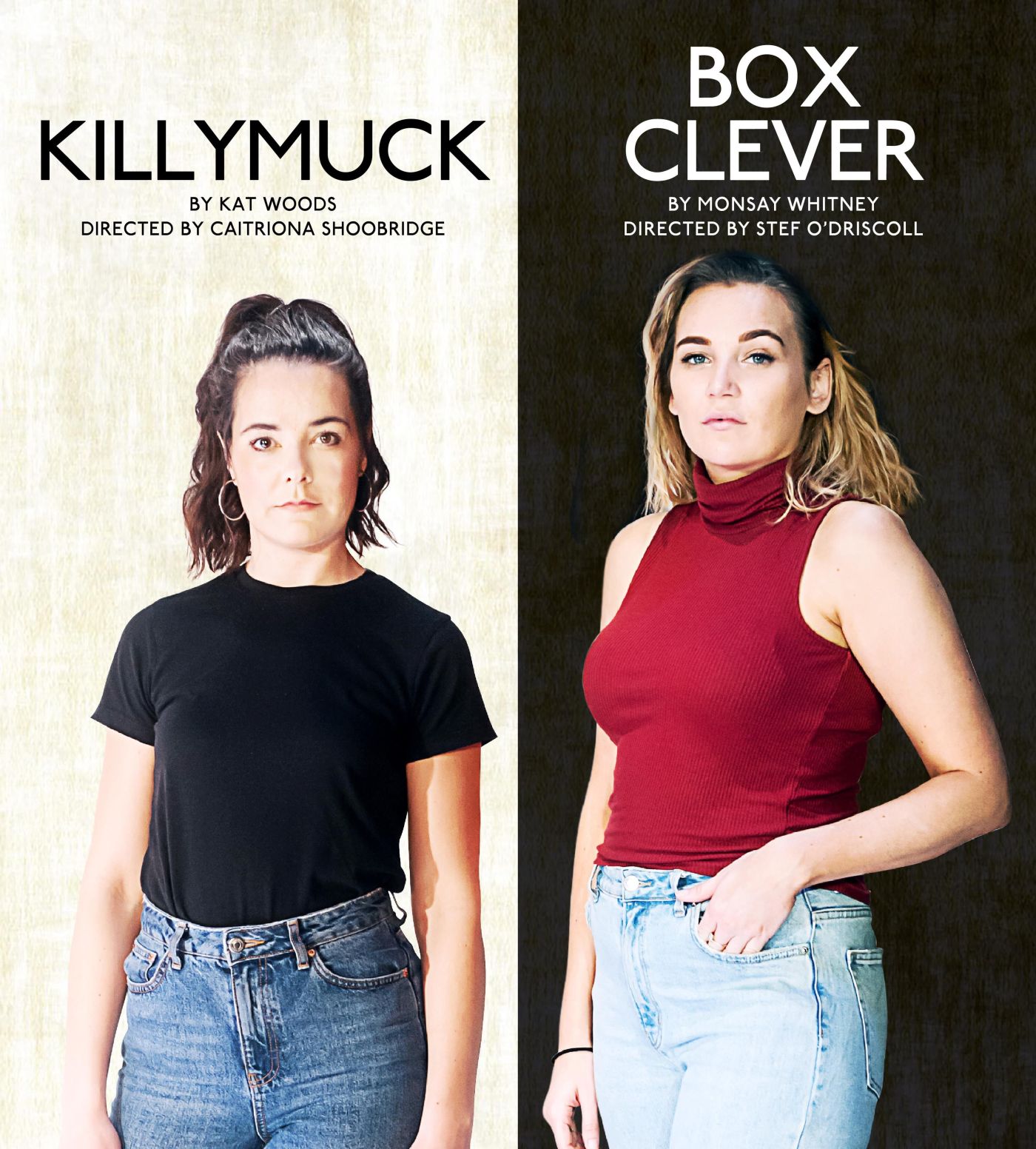 Later this month The Bunker plays host to a double bill of one-woman shows which explore the political cause and effect of what being born with less means. Killymuck, written by Kat Woods and starring Aoife Lennon, offers an insight into how growing up on a council estate affects the present and informs the future; while Box Clever, written by Monsay Whitney and starring Redd Lily Roche, confronts us with the repercussions of systemic failure in politics to care about the benefits or working class.

I recently caught up with Aoife Lennon and Redd Lily Roche to find out more about their upcoming shows and what audiences can expect.

What drew you into acting?
I find this quite hard to pinpoint actually. The town I grew up in didn’t have a lot of performing opportunities, or at least none that were available to me, and studying Drama is not an option on the Irish Curriculum; yet I always knew I wanted to do it. I studied Theatre for a year when I left school and went on to do a Drama Degree, which is where I met Kat!

What is Killymuck about?
Inspired by real events, Killymuck tells the story of a housing estate built on a pauper’s graveyard in 1970s Ireland. Niamh navigates life through the parameters, trials and tribulations of being a kid from the benefit class system. Lack of opportunity, educational barriers, impoverishment, addiction and depression are the norms as her struggle to escape the underclass stereotype becomes a priority. It’s a darkly comic piece that highlights class, and the oppressive structures that are implicit in the cycle of impoverishment.

Can you tell me more about your character?
Niamh is a force! She is courageous in a way I could only dream of being which makes her so much fun to play. She is fiercely intelligent, witty and resourceful, but most importantly she is a fighter.

What attracted you to the play?
First and foremost: Kat Woods. She is a phenomenal talent. Scripts like this don’t come along too often. Telling Kat’s story is an absolute honour. Secondly: the subject matter. True representations of the underclass are not explored. We either have plays that glorify the worlds and display grotesque caricature stereotypical imagery, or some other form of story that only a world of poverty and violence can lead too. The story arc is often a manifestation of hopelessness and a want to perpetuate the cycle of the stereotypical worlds that benefit claimants inhabit. The rut of abuse begetting abuse, failure and an adult life of doom. This is not representative of the community that Kat inhabited.

What can audiences expect from the play?
To laugh, to cry, to feel empowered, connected, to challenge the existing class narrative and to leave the theatre space with a burning desire to fight against austerity!

How has the play developed since it was performed at the Edinburgh Festival?
In Edinburgh it was just myself and Kat. I performed in it and Kat did literally everything else. This time round we have a whole team of amazing creatives so it feels like a completely different production in loads of ways, which is hugely exciting. Our director Caitriona Shoobridge has been the missing piece of our puzzle.

How does being in a one-woman show compare to larger productions that you’ve been a part of?
I guess there is more pressure. The weight of carrying the show lies solely with you. I found it hard not having another actor to debrief with when I came off stage in Edinburgh, so I guess it can feel a bit lonely. I’m so glad Killymuck is running as a double bill with Box Clever as I feel like Redd and I are in it together!

What would you like the play to achieve?
A Broadway transfer? Jokes. I would love for it to go on tour as I want it to reach as many people as possible.

Can you tell me a little bit about Box Clever?
At first glance Box Clever is one woman’s experience of a refuge, and her struggle to protect her daughter in a system that seems to have her set up to fail. But really when you look closer it’s a thought-provoking insight into British patriarchy as it stands now. It’s a one-woman show, but Marnie’s story is real life for thousands of women up and down the country.

What inspired you to become a performer?
I always loved storytelling in every form but thought people like me, from my neighbourhood, didn’t go out and become actors, so it never even crossed my mind. I saw a show by Cardboard Citizens and left my name on a mailing list on my way out. They emailed me about auditions for a year-long free national youth theatre programme and I thought right, if I get this I’m going to give it all up and become an actor. If not I’ll just carry on what I’m doing. I was working in an estate agency at the time. Thank God it all worked out because I’ve never looked back, and it’s been 9 years.

Tell me about your character.
Marnie is fierce, kind, a fantastic mum and unlucky in love. Her insights on people and life in general are hilarious – I spend most of my time in rehearsals cracking up at the things she says.

What was your initial response to the play?
I laughed. I cried. I had to read it again to let it all sink in.

Why should people come and see Box Clever?
Box Clever is hilarious, heartbreaking, and you will leave the theatre feeling something different to how you were when you walked in. And that’s what theatre is all about.

What would you like the play to achieve?
That’s a big question! I think as long as people leave thinking about real girls like Marnie and what we can do to help change their story then that’s enough. Years ago these women’s stories were not being told, so having it up on stage is a statement in its self.

What makes the play relevant to today’s society?
Politically, Britain is so highly charged at the moment for so many reasons – people are not scared to criticise the patriarchy. People want to know: what’s going on? Where is the duty of care? Who the f**ck is in charge around here? Well, those are the exact same questions we are asking in Box Clever. It was written in 2012 but its more relevant than ever in 2019! Come see for yourself!