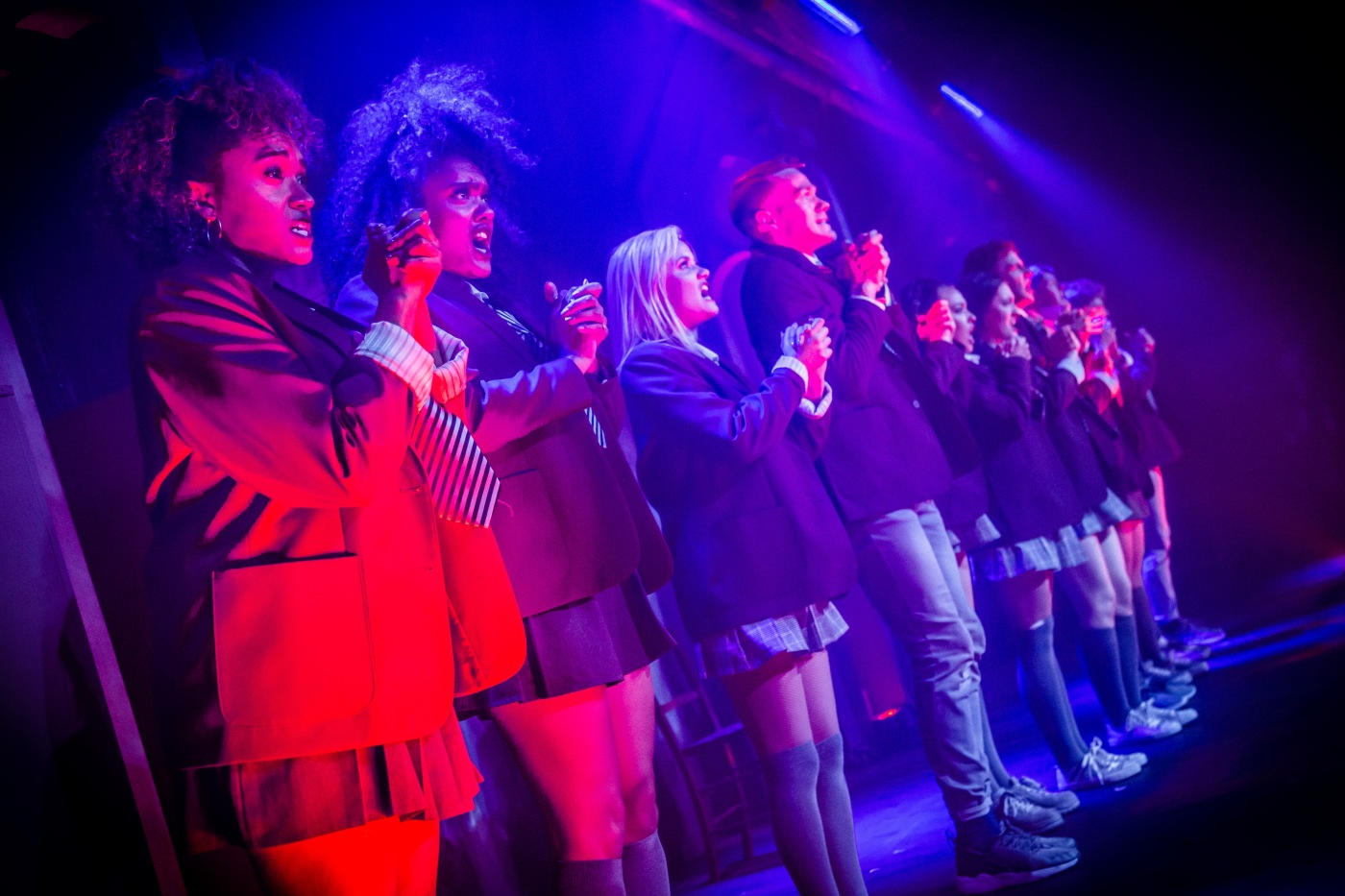 Since its debut off-Broadway almost twenty years ago, the musical Bare: A Pop Opera has gained a cult following among fans and now returns to the stage with a limited run at the Vaults.

With music from Damon Intrabartolo and lryics by Jon Hartmere (who joined forces to write the book), the musical follows a group of high school students at an American Catholic boarding school. As the high schoolers put on a production of Romeo and Juliet, led by nun with attitude Sister Chantelle (Stacy Francis), they navigate issues relatable to teenagers today including sex, drugs, relationships and identity. Peter (Daniel Mack Shand) is an altar boy who’s in love with his roommate Jason (Darragh Cowley). The pair keep their relationship secret for fear of reprisals from their classmates and Peter’s mum, Claire (Jo Napthine). When Jason catches the eye of Ivy (Lizzie Emery), the drama eventually unfolds and their relationship leads to tragic consequences.

Directed by Julie Atherton, Bare is a fast-paced production, packed full of drama and emotion, but unfortunately the show is let down by the venue. While the Vaults is an imaginative performance space for some shows, with Bare it just doesn’t work. The t-shaped stage is far too long and narrow, resulting in missed moments when the action takes place at either end away from half of the audience. The sound issues continue when some of the performers are forced to compete with the impressive backing band (led by Musical Director Alasdair Brown), not to mention passing trains and can’t quite manage to do so; while at other times the main action is drowned out by unnecessary background movement. The staging also results in uncomfortable viewing for the packed in audience, many of whom will have to spend the two-and-a-half-hour duration looking at a 90-degree angle, perched on uncomfortable chairs.

But there are brighter moments within this production, and they come in the form of Stacy Francis and Georgie Lovatt, who steal every scene they’re in. Francis is a vocal powerhouse, her rendition of God Don’t Make No Trash one of the highlights. She captures the nun’s frustration with the students perfectly and provides much of the comic relief. Likewise Lovatt excels as Nadia, Jason’s wickedly sarcastic, sharp-tongued sister who’s dealing with issues of her own. It’s hard to believe this is Lovatt’s professional debut as she belts out her numbers seemingly with ease, and she surely has a bright future ahead of her. Elsewhere Lizzie Emery comes into her own during the second act, her solo All Grown Up adding to the emotion of the piece; while Darragh Cowley and Daniel Mack Shand do a fine job as star-crossed lovers Jason and Peter, although at times their chemistry is lacking. While the large cast on the whole do well, one or two performers do lack the vocal power this musical needs to succeed.

While not all of the musical numbers are memorable, there are some witty, clever songs packed into the show, including Birthday, Bitch! And Plane Jane Fat Ass, accompanied by Stuart Rogers’ imaginative choreography, which makes good use of the sprawling stage and works to good effect with Andrew Ellis’s dramatic lighting (although the spotlight was a little too much at times).

Given the subject matter there’s sure to be comparisons to Spring Awakening, but currently this production isn’t quite in the same league. On the whole Bare: A Pop Opera is a promising musical with good ideas and a fine soundtrack performed by an enthusiastic and energetic cast. With a little tightening up and a more suitable venue, it could be great.

Bare: A Pop Opera plays at the Vaults until Sunday 4 August 2019.