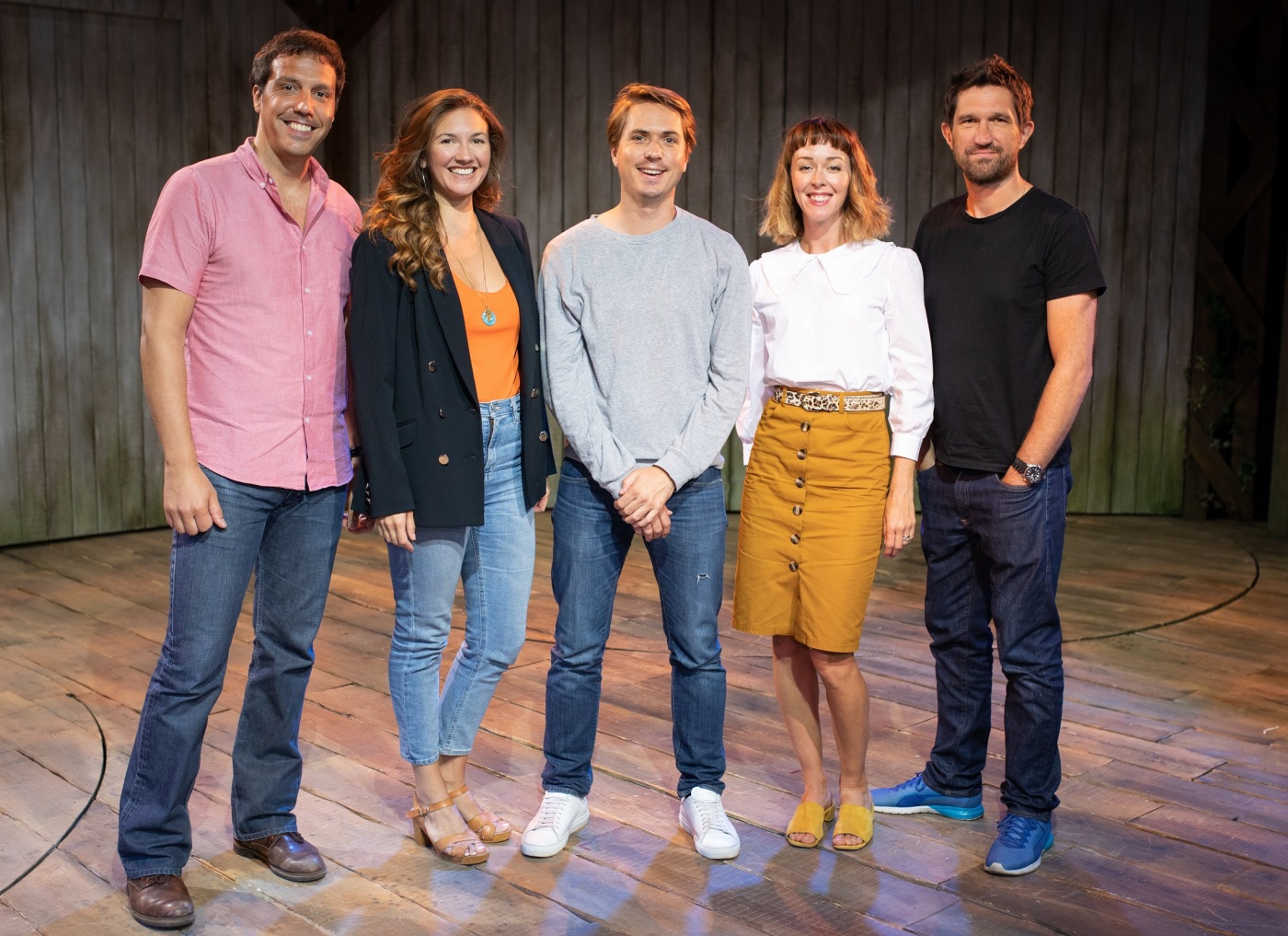 The first image featuring the cast of What’s In A Name? has been released before they hit the road this September in the new touring production of the international hit comedy. The witty and razor-sharp production, which opened to critical acclaim at the Birmingham REP in 2017, hilariously captures a particularly awkward family dinner party. The full cast of the comic masterpiece stars Joe Thomas (The Inbetweeners, Fresh Meat), Bo Poraj (Miranda, Musketeers), Laura Patch (Afterlife, Star Stories), Summer Strallen (Top Hat, Young Frankenstein) and Alex Gaumond (Company, Dirty Rotten Scoundrel, Matilda). Further images can be downloaded here.

What’s In A Name? is adapted and directed by Jeremy Sams from the award-winning French film and stage sensation, Le Prènom, by Matthew Delaporte and Alexandre de La Patellière. The production will visit Guildford’s Yvonne Arnaud Theatre, from 5-14 September, before touring to Glasgow, York, Aylesbury, Cambridge, Windsor, Richmond and Southampton.

Father-to-be Vincent and his partner Anna are invited to dinner by his sister Elizabeth and her husband, Peter. They are joined by childhood friend Carl for a mature and sophisticated gathering.

The meal is lovingly prepared, and wine carefully selected. The friends are prepared for the usual humorous exchanges they’ve come to expect.

But tonight, a startling revelation about the name chosen for Vincent’s and Anna’s expected child becomes the catalyst for a destructive argument which spirals hysterically out of control. Tonight no one is holding back! Egos, childish resentment and unspoken feelings are relentlessly and hilariously exposed for the first time.

Playing Vincent is Joe Thomas, an actor and writer best known as Simon in the multi-award winning E4 show The Inbetweeners. Following the success of The Inbetweeners (and the two eponymous films that followed) Joe starred as Kingsley in all four series of Fresh Meat, and as George in Chickens, which he also co-wrote. Most recently Joe starred as Nick in the 2018 feature film The Festival and as Martin Lavender in the BBC2 sitcom White Gold. Joe has script development deals with Channel 4 and Fudge Park/BBC and was on the latest series of Dave’s Taskmaster.

Bo Poraj is playing Peter. He is perhaps most well-known for his role as Mike in the ever popular BBC comedy series Miranda. He played a regular role in Musketeers (BBC) and has been seen in The Thick Of It and Boomers (also BBC). On stage his most recent credits include Rasheeda Speaking (Trafalgar Studios 2, nominated for Best Supporting Male in a Play Award, Off-West End Theatre Awards), Gloria, Acceptance (Hampstead Theatre) and Blithe Spirit (Theatre Royal Bath, UK Tour, West End). Film credits include The Boat That Rocked.

The role of Elizabeth is played by Laura Patch, a comedy performer and actor known for playing various roles in Star Stories. Most recently Laura appeared in Ricky Gervais’ Netflix series Afterlife. Further television credits include A Brief History of Tim, New Tricks, Dol & Em, Youngers, Holby City, Starlings, Being Human and The IT Crowd, along with the web series Bad Mother. Film credits include Songbird alongside Cobie Smulders and Jessica Hynes.

Playing Anna is Olivier Award-nominated actress Summer Strallen. She most recently starred as Alice in Alexis Michalik’s Intra Muros at Park Theatre and she is best known for leading West End stage roles in Top Hat, The Sound of Music, Young Frankenstein, The Drowsy Chaperone, Guys and Dolls, The Boy Friend, Love Never Dies, Cats, and Chitty Chitty Bang Bang. On TV, her credits include Hollyoaks in which her character Summer Shaw auditioned for and won the role of Maria Von Trapp in The Sound of Music which Strallen went on to play on stage.

Carl is played by Alex Gaumond, who most recently received critical acclaim for his role as Paul in Marianne Elliott’s multi-Olivier® award-winning revival of Stephen Sondheim’s Company in the West End. Further stage credits include A Christmas Carol (Old Vic), Caroline, Or Change (Chichester Festival Theatre), The Taming of the Shrew (Shakespeare’s Globe), The Trial of Jane Fonda (Park Theatre), Into the Woods (Manchester Royal Exchange), Seven Brides for Seven Brothers (Regent’s Park Open Air Theatre), Sweeney Todd (ENO) and Dirty Rotten Scoundrels, RSC’s Matilda: The Musical, Top Hat and We Will Rock You (all West End). Film credits include The Hustle, My Dinner with Hervé and Hampstead.

The original play premiered in 2010 at the Théâtre Édouard VII in Paris, France, where the production received six Molière Award nominations and ran for over 300 performances. Matthew Delaporte and Alexandre de La Patellière then wrote the screenplay for the film (2011) which played to over 3.25 million people in France alone. It received widespread critical acclaim, and won several César awards from the French Academy of Cinema Arts and Techniques, along with the Grand Prix Hydro-Québec at the Festival du cinéma international en Abitibi-Témiscamingue, and the Radio Canada Audience Award at the Cinéfranco International Francophone Film Festival in Toronto. The Italian translation of the movie went on to receive several prestigious Italian National Syndicate of Film Journalist awards. The play has now been translated into over 22 languages, and has had incredible box office success around the world.

What’s In A Name? is written by Matthew Delaporte and Alexandre De La Patellière with adaptation, translation and direction by Jeremy Sams. Set will be designed by Francis O’Connor and lighting design is by Rick Fisher.