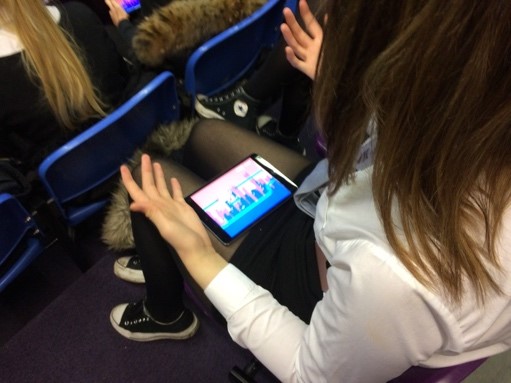 Kate Forbes MSP, Minister for Public Health and Digital Economy, Scottish Government said: “The Big Data Show supports the Scottish Government’s ambitions to raise the public’s awareness of cyber threat. Not only does it help ensure young people are clued up about the risks associated with sharing data online but it also gives them the valuable chance to learn about careers in cyber security.”

The Big Data Show (TBDS) is a ground-breaking immersive experience for young people (S1) weaving theatre and gaming together to explore cyber security and data citizenship.

It is about cyber resilience and being a citizen in the digital age. It is about knowing who knows what about you, what you are ‘agreeing’ to when you download an app, how to live with the challenges of social media…and it’s a lot of fun.

It is also a drama about the first prosecuted cyber hack in the UK. Co-written by internationally acclaimed playwright Clare Duffy and Rupert Goodwins, one of the young hackers involved in gaining access to Prince Philip’s BT email in the 1980s, and now a technology journalist.

The Big Data Show will open at Perth Theatre in June 2020 and move to the Royal Lyceum Theatre Edinburgh – with plans to then tour the North of England. The performances in June and July, which are solely for schools, are supported by advance workshops in the spring and followed up with workshops in the autumn. Booking for the whole project opens in September 2019.

The gaming technology involved has been developed and produced by Dundee-based studio Orthrus.

Having already developed and rigorously tested the control system and digital assets with a prototype version of the project and evaluated the learnings, Civic Digits Theatre Company is ready to bring the full version to schools across the UK in 2020.

Outcomes of The Big Data Show and its workshops include:

S1 pupils have a greater understanding of the social, cultural and political implications of our relationship with data and digital technology, particularly including cyber bullying and questions about privacy.
S1 pupils have a greater understanding of the potential of data and digital technology as opportunities for creativity;
S1 pupils feel excited about theatre as a 21st Century storytelling medium.
S1 pupils are inspired to think about careers in data and cyber security.
Pupils “became much more aware of the amount of data gathering going on in the background without them giving explicit permission and this was a shock to them.” Mrs Hollas, Drama Teacher, Perth Academy.

The Big Data Show has been shown to improve participants’ data literacy via quantitative evaluation carried out by Dr Alasdair Rutherford at Stirling University.

All participating schools will also receive CPD (continuing professional development) sessions and access to a teachers’ pack to support the cross-curricular learning promoted by this project.

“It is a really important topic, that’s not being explored enough in ways that pupils are willing to listen, the whole premise of it, using their own phones, they were hooked. I liked the fact that you used tech to talk about tech, very collaborative and all the surprises!”

The Big Data Show by Clare Duffy and Rupert Goodwins is produced by Suzy Glass for Civic Digits, with co-producers Perth Theatre at Horsecross Arts and Unlimited Theatre. It is funded by Creative Scotland, Scottish Government and the Garfield Weston Foundation.