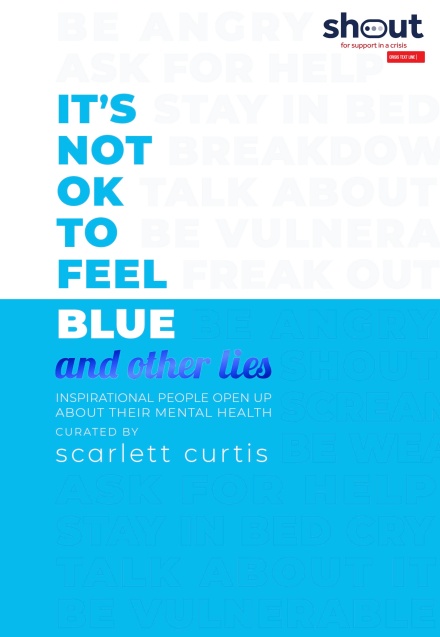 October sees the arrival of Mental Health Awareness Week and, with one in four of us in the UK now living with a mental health condition*, there’s no better time to raise awareness and eliminate the stigma surrounding mental illness.

Step forward Scarlett Curtis. Following the success of Feminists Don’t Wear Pink (and other lies), Scarlett is back to curate her second book, this time focusing on mental health. It’s Not Ok to Feel Blue (and other lies) is a collection of stories, poems and essays written by those who’ve suffered, including medical professionals, activists, politicians, bloggers, authors, musicians and actors and Scarlett herself. With charity MQ revealing that 51 percent of young people feel embarrassed about mental illness, It’s Not Ok to Feel Blue (and other lies) aims to address the shame surrounding mental health, and remind people that it’s ok to not be OK. It’s also a powerful reminder that although people may look like they have life sussed, inwardly they’re struggling too.

Featuring several deeply personal contributions from the likes of Emma Thompson, Lena Dunham, Matt Haig, Alistair Campbell and Sam Smith, It’s Not Ok to Feel Blue (and other lies) includes raw and incredibly honest accounts of living with a mental health condition and is aimed at both the people who are suffering and their loved ones. From dealing with schizophrenia and psychiatric admittance, to finding the right medication and tools to get through the bad days, the book covers it all. Whether you’re dealing with a mental health condition yourself or unsure if how to help someone who is, the book sure to connect with you. There are too many powerful contributions to mention, but those that particularly stand out include Poorna Bell’s open letter to her late husband’s depression, blogger Jo Irwin’s tale of two cities and Scarlett Curtis’s call to a suicide hotline. But despite the subject matter, this is not a depressing read – though there are contributions which are sure to make you cry, there are others which will bring a smile to your face, and if anything the book offers hope to those reading it. With more than 60 contributors, if anything It’s Not OK to Feel Blue… is a welcome reminder that you’re not alone in what you’re feeling, and that for many people there can be good days in amongst the bad. It’s not easy to speak up but these contributors have taken a big step and opened up about their problems, and in turn this may encourage others to do the same, which can only be a good thing.

It’s Not Ok to Feel Blue (and other lies) is a relatable, essential read for everyone, and is like a much-needed warm hug wrapped up in a book. In a world where the news headlines are increasingly grim, we need more books like this to remind us to keep going, and that even during the darkest of days, there’s hope.

It’s Not Ok to Feel Blue (and other lies) is out now.