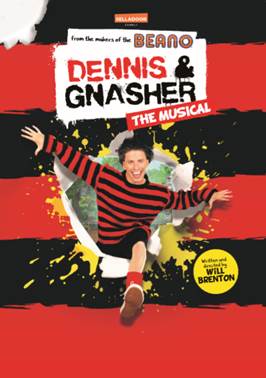 British actor Rory Maguire will star as Dennis in Selladoor Family and Beano Studios’ new stage production Dennis & Gnasher The Musical! which opens on 23 January 2020 at the Waterside Theatre in Aylesbury before embarking on a UK tour throughout 2020.

The musical tells the story of the iconic duo Dennis & Gnasher and along with their best friends, Rubi, JJ and Pieface and their mission to save Beanotown from the grips of the evil W Corps! Featuring live music, hilarious pranks, and of course, Dennis’ trademark skateboard, this brand new, high-octane musical is perfect for pranksters young and old!

The stage production follows on from the success of Beano Studios’ International Emmy-nominated TV series Dennis & Gnasher: Unleashed! The TV show stars Beano’s irrepressible hero Dennis, his dogged side kick Gnasher and fearless mates including Rubi, JJ, Pieface and his pet potato Paul. Together they cook up crazy plans, get in all sorts of scrapes and take on every challenge, no matter how big.

BAFTA-winning writer/producer-director Will Brenton will write and direct the show which will feature Dennis and Gnasher’s imitable sense of fun and ageless humour delivered with a repertoire of songs. The creative team will also include set and costume designer Jean Chan and choreographer Kendra Horsburgh.

Further casting and tour dates to be announced shortly.