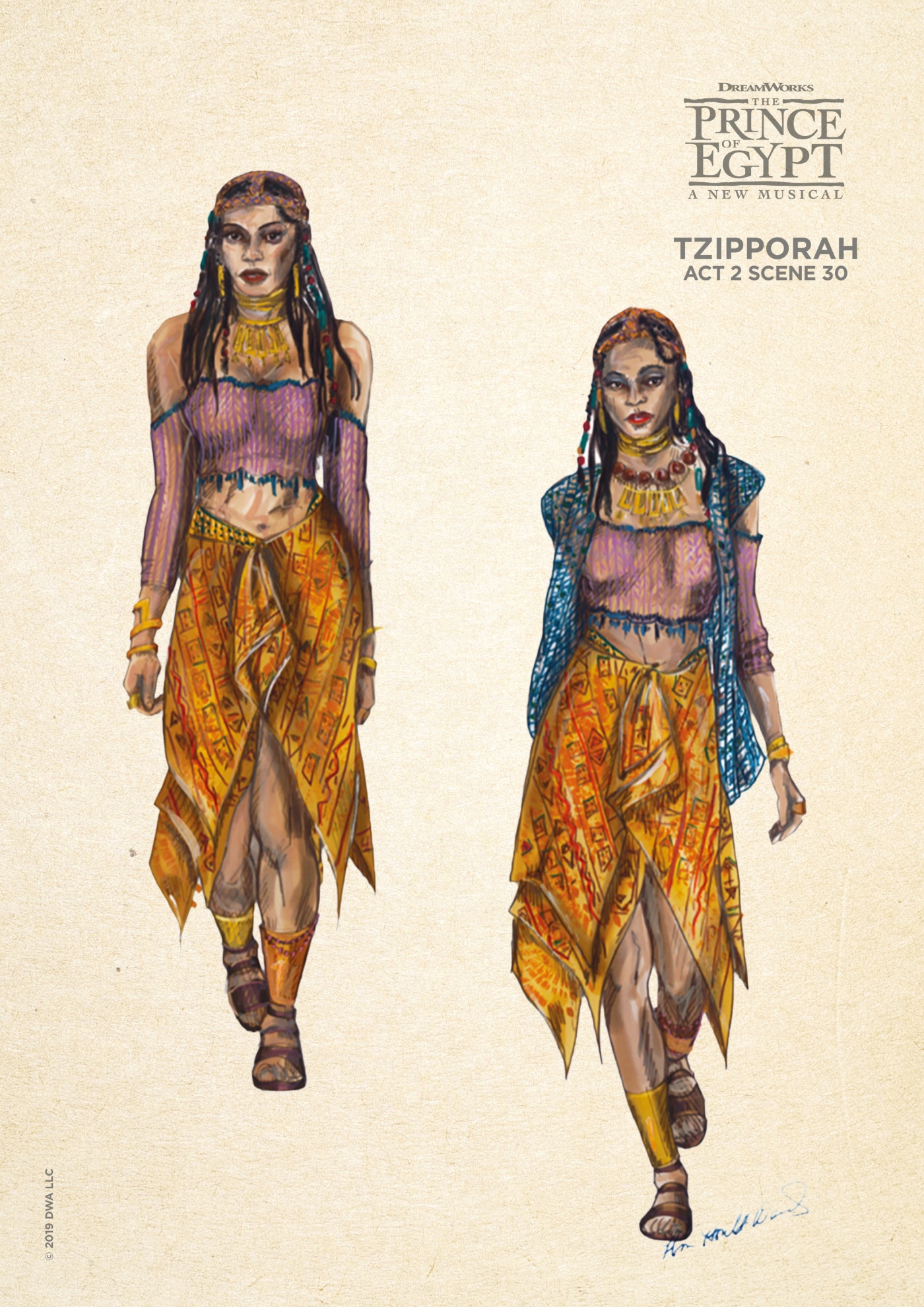 The Prince of Egypt has released the first costume sketches by the Tony Award®-winning Broadway designer Ann Hould-Ward. The new stage musical, with music and lyrics by Stephen Schwartz (Wicked, Godspell), a book by Philip LaZebnik (Mulan, Pocahontas) and based on the celebrated DreamWorks Animation film, features a stunning collection of over 380 costumes and 250 pairs of shoes and begins performances at London’s Dominion Theatre on Wednesday 5 February 2020.

Ann Hould-Ward said: “The Prince of Egypt has been a dream design job for me, melding the many different cultural and creative influences of Ancient Egypt with the stunning visual dynamic of the animated film – and reimagining them for contemporary theatre audiences. This thrilling project has enabled me to develop a multitude of design bases and fabrics that illustrate the various societies and traditions and to combine them into an extensive collection of over 380 costumes.”

The legendary Broadway costume designer Ann Hould-Ward won the Tony Award® and an Olivier Award nomination for Disney’s Beauty and the Beast. Her lavish designs have subsequently been seen in more than 40 productions of the musical worldwide. Ann has also designed extensively for opera, dance, television and film – winning multiple awards – and her more than 30 Broadway shows include the original productions of Stephen Sondheim’s Sunday in the Park with George (together with Patricia Zipprodt) and Into The Woods, receiving Tony Award® nominations for both.

The Prince of Egypt has music and lyrics by Stephen Schwartz and a book by Philip LaZebnik (who wrote the film’s screenplay) and features 10 new songs written by Stephen Schwartz, together with 5 of his acclaimed songs from the DreamWorks Animation film, including Deliver Us, All I Ever Wanted, Through Heaven’s Eyes and the Academy Award®-winning When You Believe, which was a global hit for Whitney Houston and Mariah Carey as well as a UK chart-topping winner’s single for The X-Factor.

Performances of “the new blockbuster musical” (The Guardian) begin at London’s Dominion Theatre on Wednesday 5 February 2020, with an official West End premiere on Tuesday 25 February 2020, for a limited 32-week engagement. The production will play a special Half Term matinee on Thursday 20 February 2020 at 2.30pm and the following extra sjpws have also now been added: Tuesday 14 April, Tuesday 11 August and Tuesday 25 August 2020, all at 2.30pm.

Journey through the wonders of Ancient Egypt as two young men, raised together as brothers in a kingdom of privilege, find themselves suddenly divided by a secret past. One must rule as Pharaoh, the other must rise up and free his true people; both face a destiny that will change history forever.

The Prince of Egypt runs at the Dominion Theatre from Wednesday 5 February 2020.