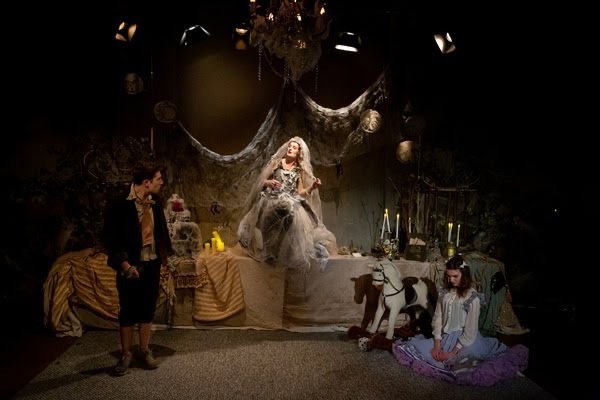 It’s December, which means ‘tis the season to be jolly, and ‘tis also the season for a good old adaptation of a Charles Dickens novel. And while A Christmas Carol is the more obvious choice for this time of year, the Theatre Lab Company has turned its attention to another Dickens’ classic – Great Expectations, which is now running at the Playground Theatre.

Great Expectations tells the story of Pip (Samuel Lawrence), a young boy who lives in poverty with his abusive sister (Fanny Dulin) and her blacksmith husband Joe (Matthew Wade). One day Pip is invited by Miss Havisham (Helen Bang), an eccentric woman who hid herself away after being jilted at the altar, to play at Satis House. It’s there that he meets her adopted daughter Estella (Denise Moreno), and Pip soon falls for the young girl, despite her obvious coldness. When he’s older, Pip comes into some money from a mysterious benefactor and moves to London to become a gentleman, but Estella is never far from his thoughts.

The Theatre Lab Company is renowned for producing visually striking work, and Director Anastasia Revi has ensured that this Gothic adaptation of Great Expectations captures the audience’s attention the instant they walk through the theatre’s doors. The cast are already out on stage as theatregoers enter to take their seats, paused in mid action and for a brief moment it’s hard to tell if they’re real people or waxwork dolls until the play eventually begins. Eirini Kariori’s creative set design makes the most of the Playground’s generous space, with the blacksmith’s lacklustre cottage on one side; a graveyard on the other; and in the middle, the most striking feature of the production: Miss Havisham’s house represented by a wedding table, frozen in time, the clocks all paused at twenty to nine ever since that fateful day her heart was broken.

There have been countless adaptations of Great Expectations over the years, but here Revi and writer Lydia Vie has chosen to focus more on Miss Havisham and as a result the production reaps the benefits of this. The iconic Miss Havisham is one of Dickens’ more curious creations and in this particular adaptation she’s sat up on a high table like a centrepiece for the wedding she never got to enjoy. Helen Bang is on stage for the entire first act as though presiding over the events, and though she never moves from her seat she commands the stage. It’s not easy making an impact while rooted to the spot, but Bang’s facial expressions and rapidly changing nature ensure that it’s almost impossible to take your eyes off of her. Miss Havisham is troubled and cruel, bitter yet vulnerable and Bang captures this magnificently. Samuel Lawrence also does a fine job of portraying Pip, from an innocent, emotional child to an older, more arrogant gentleman, while Denise Moreno puts in an excellent performance as the brilliantly cool as Estella. The supporting cast all do a good job, although given the speed of the performance, it’s hard to make an impact, but that being said Shaun Amos particularly lights up the stage as Pip’s friend Herbert Pocket and provides some much-needed comic relief.

This Gothic adaptation is aided greatly, not only by the set but the sound and lighting too. Chuma Emembolu’s lighting design adds to the mood of the piece, while the music and sound effects help to keep the audience on the edge of their seats. Kariori’s costumes (co-designed with Vivien Wilson) are also a highlight of the production, Estella’s wardrobe and Miss Havisham’s wedding dress as beautiful as the set.

The first act, which runs for around 70 minutes, sets the scene well and flows along nicely, but it’s the second part where the pacing suffers. At just 30 minutes long the conclusion feels too rushed to be fully appreciated and could be confusing to those not familiar with the original. The show would benefit from a longer duration to enable the story to make more of an impact. But despite the hurried second act, Great Expectations is a visually impressive production, a dark, enthralling take on Dickens’ much-loved classic, and is well worth checking out this Christmas.

Great Expectations is running at the Playground Theatre until 29 December.