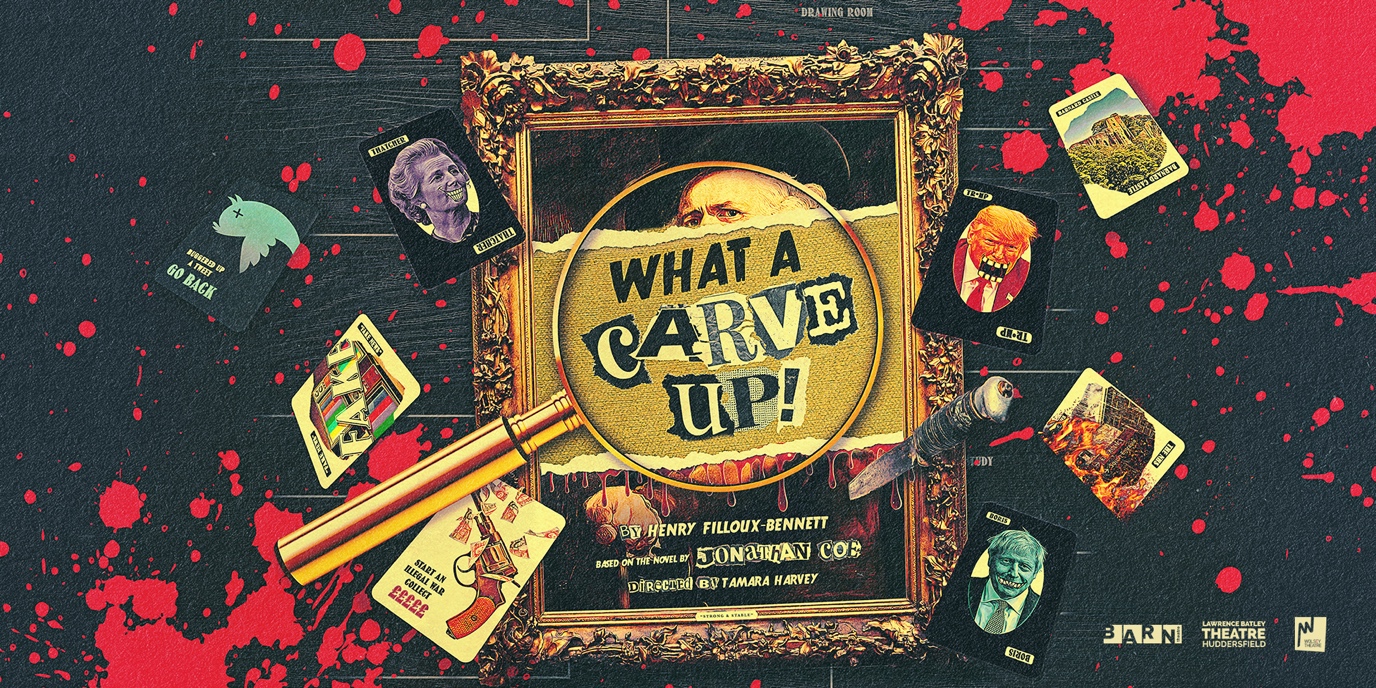 The Barn Theatre in Cirencester, the Lawrence Batley Theatre in Huddersfield and the New Wolsey Theatre in Ipswich have announced the world premiere of Henry Filloux-Bennett’s online play What A Carve Up!, based on Jonathan Coe’s critically acclaimed satirical novel.

The digital production, which will be directed by Tamara Harvey (Home, I’m Darling), chronicles the events leading up to the ‘Winshaw Murders’. Filled with murder, mayhem and madness, the murder mystery turns a satirical eye on what it is like to be a member of one of the most corrupt, powerful and toxic families in the country.

Jonathan Coe said of the new adaptation: “I’m thrilled that What a Carve Up! is being brought to the stage by such a talented and experienced team. It’s twenty-five years since I wrote the book but unfortunately its political satire seems as relevant as ever – I’m sure the new adaptation will capture that, as well as the novel’s sense of fun and irreverence. I’m looking forward to getting to know it again!”

Tamara Harvey said of directing the online production: “It’s a joy, in this moment, to work on such a bitingly brilliant story with such a talented team – albeit a joy tempered by how shockingly relevant Jonathan Coe’s satire of the ruling classes remains, a quarter of a century after it was first published. And for such an exciting project to be in aid of regional theatre, which so desperately needs investment in this moment – it doesn’t get much better than that.”

The play, which will be available internationally, will run from 31 October – 29 November 2020. Tickets can be purchased at whatacarveup.com with audience members receiving a screening link which will activate at their booked performance time for a 48-hour period. A premium option, consisting of a physical programme and pre-theatre dining recipe card, will be available for UK residents.

The recipe card included in the premium option will be curated by world-renowned chef Asma Khan. Owner of the prestigious Darjeeling Express in London’s Soho, Asma Khan was the first British chef to be profiled on Netflix’s award-winning documentary series Chef’s Table and in 2019 was named number one on Business Insider’s “100 Coolest People in Food and Drink” list.

All three theatres involved in this production have received critical acclaim for pioneering digital innovation for theatrical content over lockdown.

The Barn Theatre, based in Cirencester, has seen over 330,000 audience members engage with their online theatrical content during lockdown. Their children’s entertainment series Tweedy’s Lost & Found with renowned Giffords Circus clown Tweedy received both critical and public acclaim and featured special celebrity guest appearances which included Helena Bonham Carter, Hugh Bonnevilleand Reece Shearsmith. Their Shakespeare in lockdown series Bard From The Barn, co-produced with Aaron Sidwell, has featured the work of over 150 creatives including thirty six 2020 drama school graduates in their second series. The Barn Theatre is currently hosting their first outdoor theatre season BarnFest which has included productions of Michael Morpugo’s Private Peaceful and the Kander & Ebb musical revue The World Goes ‘Round.

What A Carve Up! will mark the Lawrence Batley Theatre’s third online play written by Henry Filloux-Bennett following Nigel Slater’s Toast and The Understudy, starring Stephen Fry and Russell Tovey, which welcomed digital audiences from over 40 countries. At the start of lockdown the theatre, based in Huddersfield, launched their free online channel, LBTV, which provided workshops and masterclasses, storytelling sessions and backstage videos – reaching over 19,000 engagements. They have also recently launched the Charlotte Holmes Adventure Box, a new interactive theatrical experience for children aged 7 – 12 years old to enjoy from home.

Throughout lockdown the New Wolsey Theatre in Ipswich have been running their bi-weekly online blog Bounce to connect audiences with digital content which has included their mini-project Storyline, where audiences can send the theatre a story for the theatre to adapt for future creative projects. This project resulted in creative projects including an animated film based on Heidi McEvoy-Swift’s submitted story Scrubs.

A portion of the proceeds raised by What A Carve Up! will be donated to a freelance fund to support the creative workforce that the theatres would not be able to survive without.

The murder mystery is written by Henry Filloux-Bennett (Nigel Slater’s Toast), based on the award-winning novel by Jonathan Coe, and directed by Tamara Harvey (Home, I’m Darling). Produced by the Barn Theatre, Lawrence Batley Theatre and New Wolsey Theatre.

Casting and further creative announcements will be released at a later date.

What A Carve Up! streams from 31 October to 29 November.