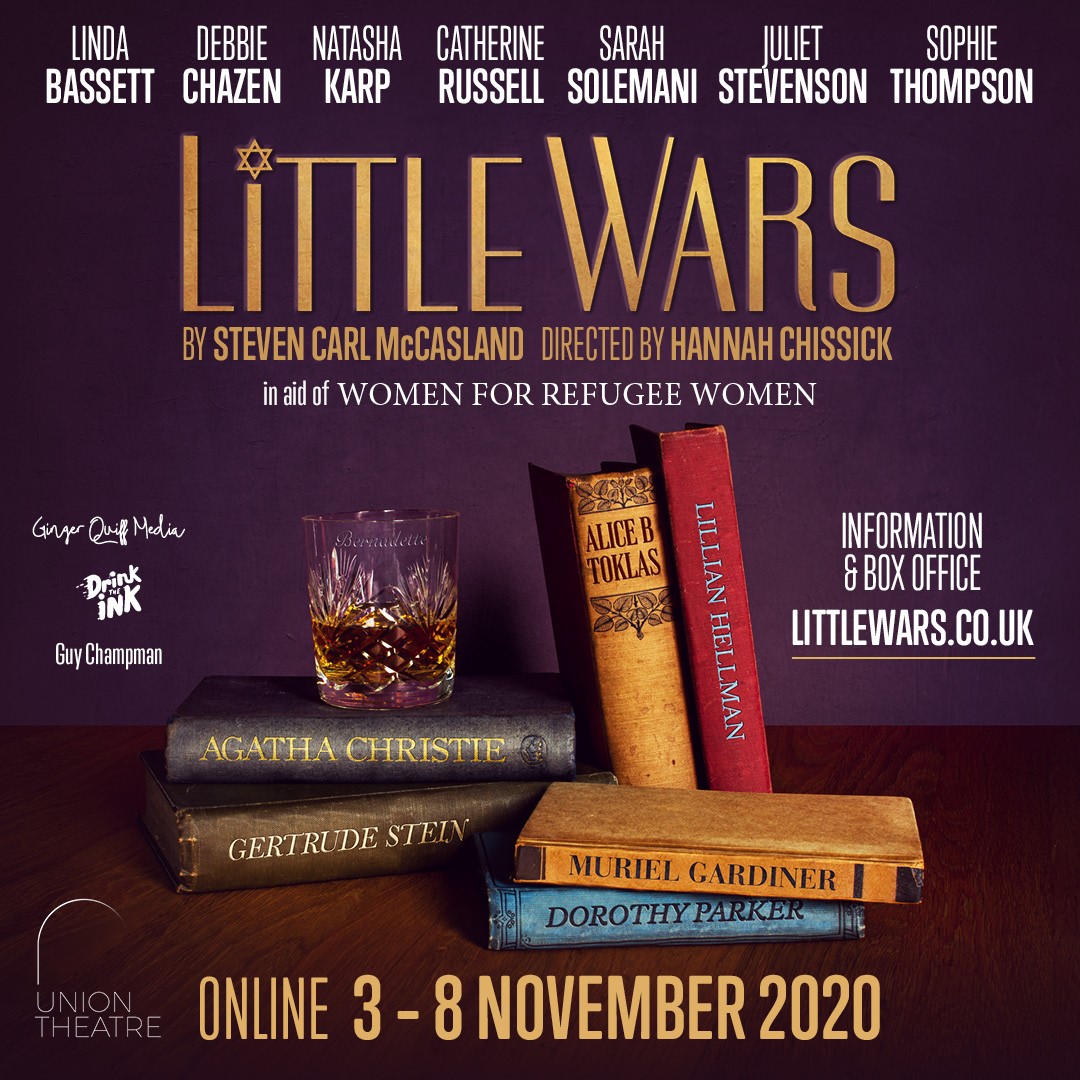 Due to popular demand, the digital revival of Steven Carl McCasland’s ‘dinner’ party drama Little Wars, will be extending its run for three weeks to provide entertainment during the lockdown. The production has seen huge praise since the launch, bringing together an exceptional all-female cast of British stage and screen legends, including Juliet Stevenson (Truly, Madly, Deeply; The Doctor, Almeida; Blindness, Donmar Warehouse), Linda Bassett (Call The Midwife; East is East) and Sophie Thompson (Feel Good; Present Laughter, Old Vic).

Directed by Hannah Chissick (Flashdance, UK & International tour; Pack of Lies, Menier Chocolate Factory) the rehearsed reading was filmed at the cast’s homes and edited together. The online revival is now available to stream until 3rd December, in collaboration with Southwark’s The Union Theatre.

Little Wars unites literary figureheads Gertrude Stein (Bassett), her girlfriend Alice Toklas (Russell), Dorothy Parker (Chazen), Lillian Hellman (Stevenson) and Agatha Christie (Thompson), with anti-fascist freedom fighter Muriel Gardiner (Solemani), in this deliciously comic and touching drama about the power of coming together for a shared cause. Tensions are high and secrecy lingers in the air, but with libations flowing and the threat of World War II looming the guests are close to boiling point.

Set in 1940s France, on the evening the country crumbled to Hitler’s tyrannical rule, the play acts as a brutal reminder of the mistreatment of the Jewish people. At a time when antisemitism is rife, gender politics are divisive, and LGBTQ+ hate crime has increased, it is a stark realisation that not much has changed.

The entire cast and creative team are raising money in aid of Women For Refugee Women, a cause that remains close to their values, and the underlying message of the play. Notwithstanding the challenges of 2020, the producers believe that it is vital, now more than ever, to support causes such as this.

Thomas Hopkins of Ginger Quiff Media comments, It’s been great to see all of the reactions to Little Wars and the incredible cast involved. We’re pleased to be able to extend the streaming throughout lockdown, giving more people the chance to experience quality theatre online from the comfort of their home. It’s a crazy time, but we need creative outlets to remain accessible.

Alongside the streaming, GingerQuiff Media will be collaborating with Drink the iNK for a new pre-show conversation series, Open Creative Process, allowing audiences full-access into the creative process of making digital theatre – from start to finish.

Little Wars is available to stream until 3 December.