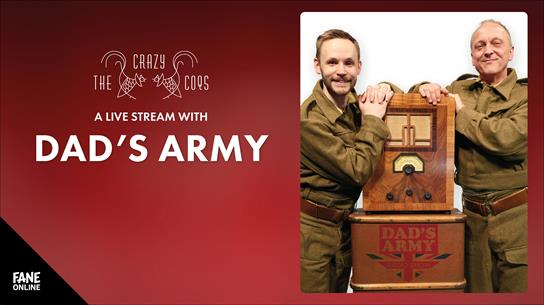 Dad’s Army is one of Britain’s best-loved sitcoms, having run for nine series and over 80 episodes. As well as being made into a film, stage show and radio show, the series returned in 2019 with three lost episodes recreated to commemorate 50 years since the first broadcast. And fans of the series were in for a treat last weekend with the Dad’s Army Radio Show live at London’s Crazy Coqs for three nights only, which coincided with the 53rd anniversary since the show first aired.

Over the course of an hour performers David Benson and Jack Lane brought to life Jimmy Perry and David Croft’s classic series which focused on Walmington-on-Sea’s Home Guard during the Second World War. This clever and entertaining two-man show featured two episodes of the series based on original scripts. The first, ‘When You’ve Got to Go’ featured Pike being called up to the Air Force; while the second, ‘Never Too Old’, which was the final episode of the show, saw Lance Corporal Jones marrying Mrs Fox.

David Benson and Jack Lane, dressed like extras from the show in the familiar khaki uniform and boots, take on a number of characters, both male and female, to great comic effect. While they may not necessarily look like the original actors, they captured the characters’ mannerisms and postures perfectly, with Jack Lane’s stiff and reserved Captain Mainwaring and skittish Lance Corporal Jones, not to mention David Benson’s more relaxed Sergeant Wilson with his all-knowing looks. It’s impossible to pick favourites, but Benson’s Wilson and his stern Private Fraser were certainly impressive, as was Jack Lane’s Private Pike. Dad’s Army is renowned for its memorable catchphrases and fans of the show weren’t disappointed, with Benson and Lane delivering classics such as Jones’ “Don’t Panic” with precision and perfect comic timing. Jack Lane’s delivery of Captain Mainwaring’s “You Stupid Boy” was so spot on that you could almost have believed Arthur Lowe had entered the room. Benson and Lane were an absolute joy to watch and it was fascinating to see them switch between characters in the blink of an eye. Possibly the most entertaining moments were when one performer voiced both characters within a scene, having to switch quickly between characters, and they did so with ease. Even the odd times where they corpsed they did so in character, adding to the humour of the evening.

Dad’s Army Radio Show offers a fascinating look at how radio plays are made, with Benson and Lane creating sound effects and also managing to voice crowd scenes. It also gives the audience a chance to sit back and fully appreciate this classic comedy, which still entertains more than fifty years since it first aired. Dad’s Army Radio Show is fast, funny and takes an affectionate look at this successful British comedy show. A must see for fans of the original.