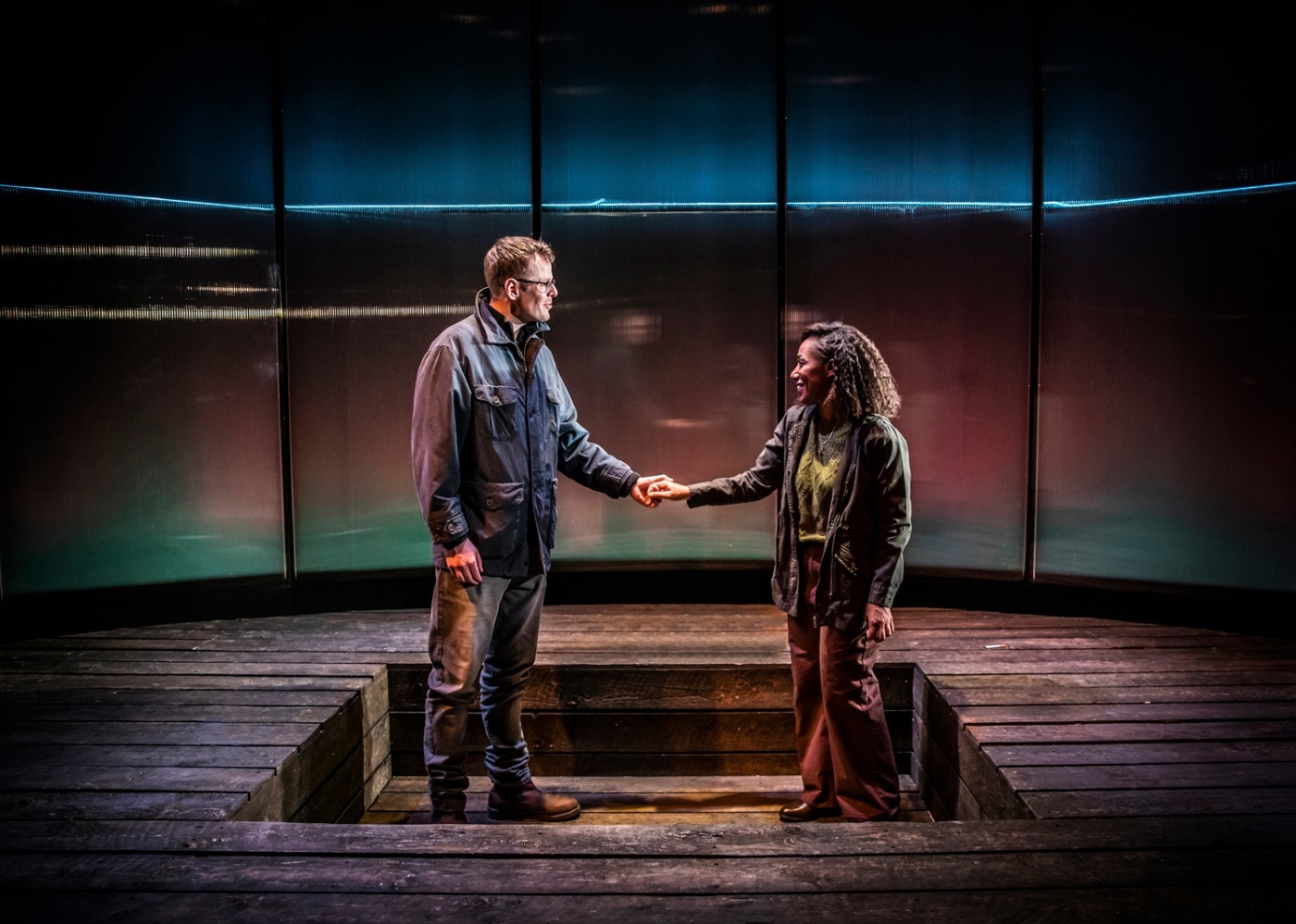 Earlier this year Colchester’s Mercury Theatre announced its Mercury Originals season, a programme of ground-breaking new plays from local writers. The first production in the programme, Sirens, kicks off the season in style and is a touching story of family, loss and belonging.

Written by Kenny Emson, Sirens is set on Mersea Island in Essex and follows two characters, Rory (Simon Darwen) and Gemma (Tanya-Loretta Dee) over three time periods. In 1987 the pair break into the Mersea Island RNLI station on Halloween. Rory wants to escape the island and run away for a new life in London, Gemma wants him to notice that’s she’s not drinking. But the evening doesn’t go to plan and their lives are turned upside down. The play picks up 17 years later with Rory trying to bond with his daughter, Isla (Jesse Akele), while still dealing with the repercussions of his actions that night. Fast forward another 17 years and Rory and Gemma meet once again and reflect on the events of the past 34 years.

With strong direction from Bethany Pitts, Sirens is an engaging and thought-provoking production from start to finish. Kenny Emerson paints a realistic picture of living in an island community, and his script combines comedy and tragedy incredibly well. There are laugh-out-loud moments to begin with – particularly with jokes to entertain local audience members (unless you’re from Coggeshall!) before they give way to a more reflective and moving atmosphere in the third act. The pacing throughout is spot on and reflects the changing tone of the piece – the first act is fast-paced as the young Rory and Gemma spar with one another, and slows by the third act as the more mature couple stop and take stock of their lives.

Earlier this year the Mercury Theatre reopened following a multi-million pound redevelopment, and its new studio takes centre stage for this performance. The intimate setting works incredibly well and Cara Evans and Zoë Hurwitz’s design ensures there’s nowhere to hide as Ryan and Gemma’s hopes and dreams come crashing down in front of us. The sound and lighting design (courtesy of Frazer Merrick and Kathrine Sandys respectively) is used to great effect, not only to bring the island to life but also add to the tension, particularly during the first act as Rory regales his love interest with a chilling horror story on Halloween.

Another strength of Sirens is the acting, with all three cast members putting in superb performances. Simon Darwen does a sterling job of leading the audience on an emotional journey as Rory matures over the course of the play. He’s all-too-eager and energetic as the teenager, keen to impress Gemma and impatient to escape the island; while his older Rory is the polar opposite, more mature and worldly. Darwen’s speech near the end of the play is one of the highlights, providing one of the most touching moments that’s sure to tug at the heartstrings. Tanya-Loretta Dee never fails to impress and her performance in Sirens is certainly no different. Likewise her character’s journey is incredibly effecting as Gemma experiences challenges throughout her life. Jesse Akele is a breath of fresh air as the young Isla, cheeky and all-too-knowing, but underneath it all still a youngster who likes a hug from her dad.

With strong direction, a talented cast and a realistic and moving script, Sirens is a beautiful and thoroughly captivating production that leaves you wanting more. Sirens sets the bar high for the Mercury Originals season, and is certainly not to be missed!

Sirens plays at the Mercury Theatre until 6 November.