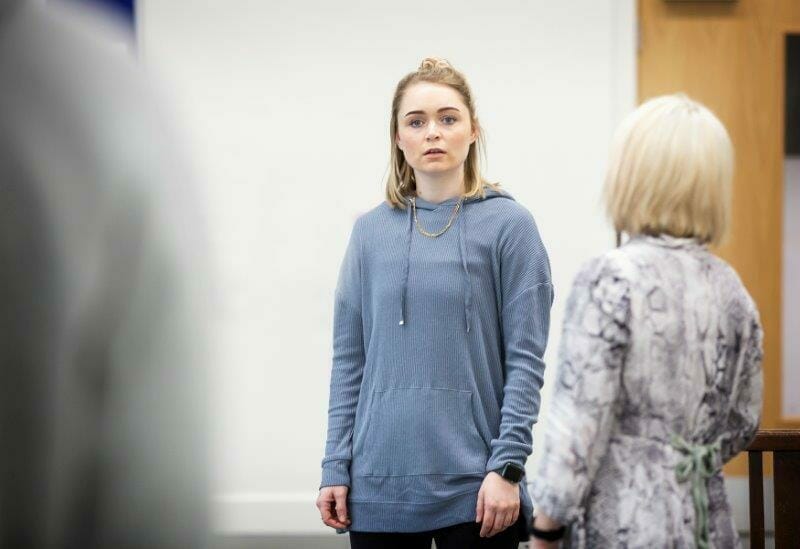 Mark Ravenhill’s thriller Blackmail, based on the original by Charles Bennett, opens at Colchester’s Mercury Theatre next month. I spoke with Jessie Hills, who plays Alice, to find out more.

Can you tell me about Blackmail?
Blackmail is based on Charles Bennett’s smash hit play, adapted for the screen by Alfred Hitchcock, in a new version by acclaimed playwright Mark Ravenhill. It brings a modern eye to a classic thriller and follows the story of 19 -year-old Alice who goes through a life-changing experience, that ultimately changes her life and those around her forever. The audience will be kept on the edge of their seats as the twists and turns of the thriller unfold.

What was it about the production that made you want to get involved?
As soon as I read ‘Blackmail’ I instantly wanted to be part of telling this important and timely story, not only was the script an exciting page turner, but Mark’s writing is so beautiful and makes a story set in 1928 feel very current and relevant for today.

What can you tell me about your character?
My character is called Alice Jarvis and she is a 19-year-old girl who is ambitious, sharp, and strong, who dreams of escaping London and bettering herself. It’s set during a very poignant time in history as the voting age for women was lowered to 21 years old, this was a huge milestone for young women and Alice also represents the young women during this time that started to dream bigger and started to find their own independence. Alice is a hugely challenging character to play and I feel very excited to portray her, but there is also a heavy responsibility to do Alice and her journey justice, in a way that honours her story and those who have unfortunately experienced something similar, which I hope I achieve.

How are rehearsals going?
Rehearsals are going really well; I feel extremely lucky to work with an incredible cast and a very supportive creative team. I am also enjoying rehearsals at The Mercury Theatre, which has created a very safe and inclusive working environment and I feel very grateful to be given this opportunity.

Why do you think the play is still so relevant today?
The play shines a light on sexual abuse and how young women are disbelieved or struggle to come forward due to the hierarchy and seniority of those around them. I think it is an important narrative to deliver especially due to the news over the last couple of years and how sadly there is a lack of progression around improving for the safety of women.

It’s also extremely important for anyone to ask themselves difficult questions about what they would do, how they would react, I hope it sparks conversations, and by people talking and sharing experiences we will all learn to be better equipped human beings in situations such as these.

What can audiences expect?
Blackmail is a thought-provoking and moving piece with plenty of twists and turns, which will keep audiences guessing throughout. Audiences should expect to be thoroughly entertained and stimulated by this important and thrilling story.

Blackmail runs at the Mercury Theatre from 4-19 March.