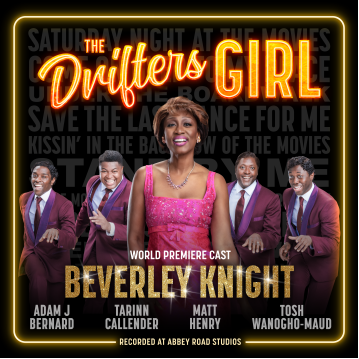 Following Olivier Award nominations for Best New Musical and Best Actress in a Musical, Michael Harrison and David Ian are thrilled to announce The Drifters Girl World Premiere Cast album, recorded at the legendary Abbey Road Studios and due for release on Friday 6 May 2022, by Tag8 Music, with BMG Rights Management (UK) Limited, Treadwell Entertainment Group and Showtime Productions Ltd.

The album was produced by the shows arranger and orchestrator, Chris Egan, who along with the creative team, including co-producers Trystan Francis and Will Stuart, took over the iconic Abbey Road Studio 2, with the full show band plus some additional musicans to create an enhanced version of the songs from the show.

The album includes the incredible songs from the show from Stand By Me, Under the Boardwalk, Saturday Night at the Movies to the emotional Harlem Child.

The Drifters Girl has been thrilling audiences since beginning in Newcastle in October 2021. The show transferred to London in November 2021, and has continued to play to packed houses and nightly standing ovations. It has recently extended its run at Garrick Theatre in London to Sunday 12 February 2023

The musical tells the story of Faye Treadwell, the legendary manager of The Drifters who, alongside her husband, George Treadwell, ground breaking manager and co-founder of The Drifters, fought for three decades to turn Atlantic Records’ hottest vocal group into a global phenomenon.

From the highs of hit records and sell out tours to the lows of legal battles and personal tragedy, The Drifters Girl charts the trailblazing efforts of the world’s first African American, female music manager and how she refused to ever give up on the group she loved. Thirty years, and hundreds of hit songs later, there is no doubt that Faye Treadwell was and always will be, The Drifters Girl.

The UK’s Queen of Soul Beverley Knight plays Faye Treadwell, with Adam J Bernard, Tarinn Callender, Matt Henry and Tosh Wanogho-Maud as the iconic group. Beverley continues in the role through to Saturday 2 July, with casting from that date to be announced.

The Drifters Girl boasts an incredible soundtrack of some of the most famous songs in history, including Save The Last Dance For Me, Under The Boardwalk, Kissin In The Back Row Of The Movies, Stand By Me, Come On Over To My Place, Saturday Night At The Movies and many more.

The Drifters Girl, with a book by Ed Curtis, based on an idea by Tina Treadwell, and which is co-created by Beverley Knight, Adam J Bernard, Tarinn Callender, Matt Henry and Tosh Wanogho-Maud is directed by Jonathan Church, with set design by Anthony Ward, choreography by Karen Bruce, costume design by Fay Fullerton, orchestrations and musical supervision by Chris Egan lighting design by Ben Cracknell, sound design by Tom Marshall and video design by Andrzej Goulding. Associate Director is Tyrone Huntley and Associate Choreographer is Myles Brown with casting by Stuart Burt and children’s casting by Jo Hawes.

The Drifters Girl is produced by Michael Harrison and David Ian.