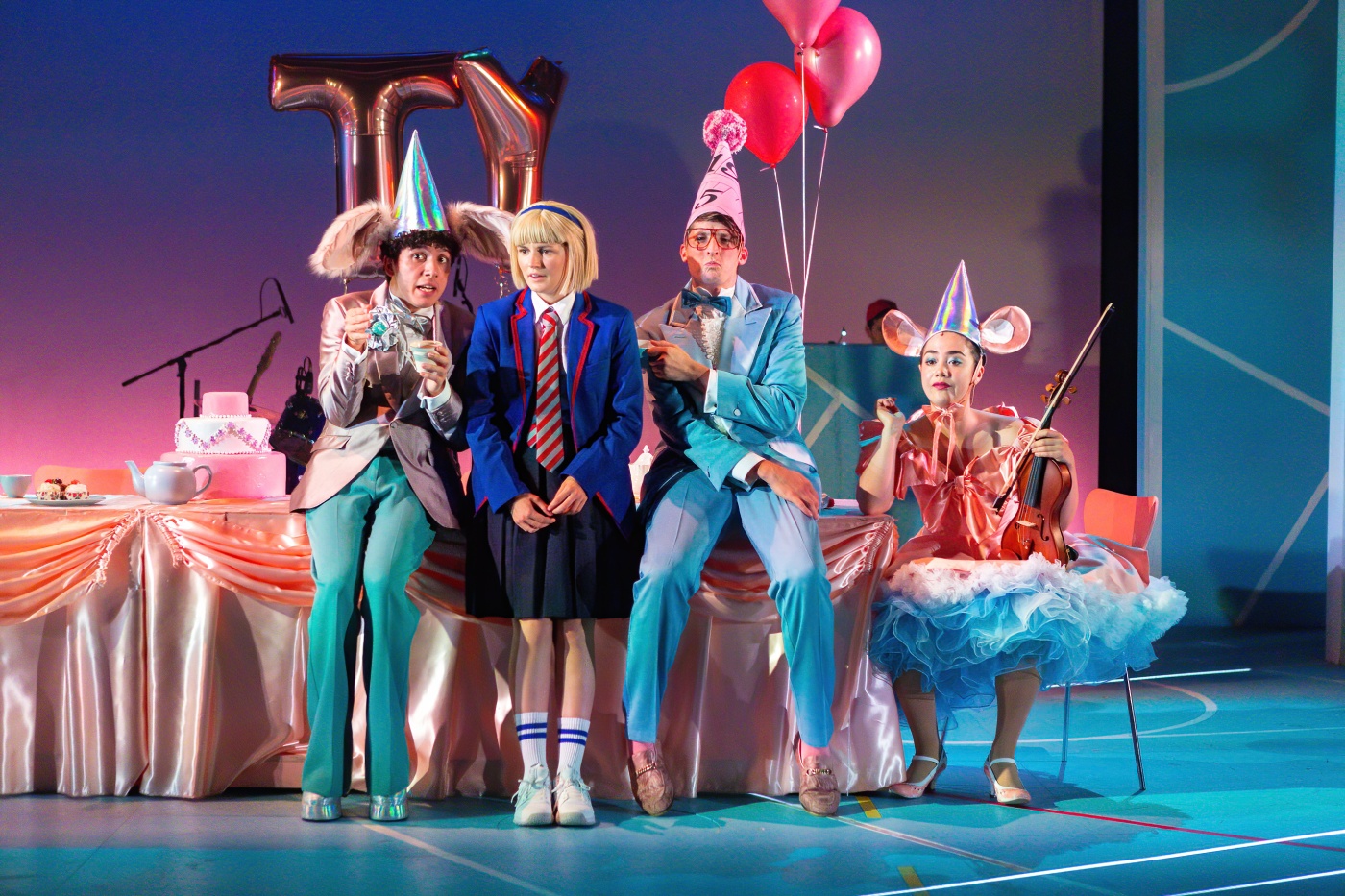 As the saying goes, the show must go on, and thankfully that’s been the case for the Mercury Theatre’s production of Alice in Wonderland. Originally due to open for previews on 29th July, the show was thrown into disarray last week when original Alice, Ruby Ablett, tested positive for Covid-19 and the first few previews had to be cancelled. As has been the case with many shows during the pandemic, it was up to a brave performer to throw their hat into the ring and take over the role at a moment’s notice. Step forward superstar Beth Mabin, who had just three day’s rehearsal time before the show finally opened on Tuesday. And thank goodness she did, because this production is a show not to be missed!

Mike Kennedy’s reimagining of Lewis Carroll’s classic tale sees Alice living with her mum and two siblings. It’s a big day for Alice as she’s due to sit an exam. But halfway through the test she falls down a rabbit hole and enters a weird and wacky world of rabbits running late, Mad Hatter tea parties. croquet-playing flamingoes and a queen with a fondness for beheading almost everyone she encounters. Lewis Carroll’s themes of adolescence, not quite fitting in, and the confusion of life are evident throughout the show and still relevant in today’s world.

Alice in Wonderland is an incredibly creative production, with strong direction from Emma Earle, and proves just how magical theatre can be as Wonderland is brought to to life. Anisha Fields’ clever design is incredibly versatile and quick-changing, allowing the story to progress without losing its momentum. There are some smart ideas to portray the weird and wonderful world, using cardboard cutouts of limbs as Alice grows, umbrellas for mushrooms and even actors in high vis jackets to portray a caterpillar, a move which pays off with help from Movement Director Dan Canham. The design combines with Joshua Gadsby’s lighting and Beth Duke’s sound design to great effect on many occasions and result in some clever ‘trickery’. A particularly effective moment is Alice’s descent down the rabbit hole, which makes even audience members feel as though they’re travelling into the unknown. Likewise the costumes are bold and colourful, ranging from school uniforms right through to flamingoes, hedgehog heads and even a lobster costume. Meanwhile, Ivan Stott’s soundtrack is pleasant enough with a real mix of styles, from tango to rock. Though not all are memorable there are certainly some ‘earworms’ in there, and the incredibly infectious ‘The Baby Goes Wah Wah Wah’ was still being sung by some of the audience members after the show was over.

Alice in Wonderland really is an ensemble performance, and credit should go to Casting Director Nicholas Hockaday for fine work in selecting this talented bunch of actor-musicians. They take on a number of roles, portraying characters in Alice’s normal world and the quirkier characters she encounters on her adventure, and do a great job throughout. It’s hard to believe that Beth Mabin has had little to no time to prepare for the role, and it couldn’t have been easy for her, particularly with some of the choreography involved (especially during the lobster dance). However Beth seems so at home in the role that you’d think she’s been doing it for years. She is incredibly endearing and gives a confident performance as Alice grows and learns on her journey.

Loris Scarpa and Jamie Noar make a great comedy double act as Tweedledum and Tweedledee, and their Darkness-esque song is particularly popular with the audience. Likewise Miiya Alexandra is a favourite with younger views as the sleep-loving Dormouse and Alice’s friend Dora, whose ambition is to have a tea shop. Mike Slader is wonderfully eccentric as the Mad Hatter, as is Natasha Karp as the hard to impress Queen of Hearts, while Hannah Azuonye is amusing as Alice’s sister, and later mischievous as the Cheshire Cat.

Tom Moores entertains as the anxious White Rabbit, armed with his handheld fan (which is sure to be no hardship given current temperatures) and delights the audience as he often wanders amongst them in the auditorium. He amuses throughout and delivers some of the funnier lines in the show with perfect comic timing (“Where are the tarts? Oh there you are). Finally Rosalind Ford steals the show with her portrayal of the iconic Duchess, a woman who’s fond of a drink but not so keen on children, and her parenting skills leave a lot to be desired. She’s utterly hilarious and exuberant and her two songs are some of the highlights of the show.

A microphone issue involving one of the more outlandish costumes, despite being unfortunate, didn’t detract too much from this inspired and engaging production. Sure to enthral audiences of all ages, Alice in Wonderland is wonderfully wacky and witty, and captures the imagination right from the very start. The show runs until the 14 August, so hop to it and grab a ticket – you’d be mad to miss it!

Alice in Wonderland is playing at the Mercury Theatre until 14 August.